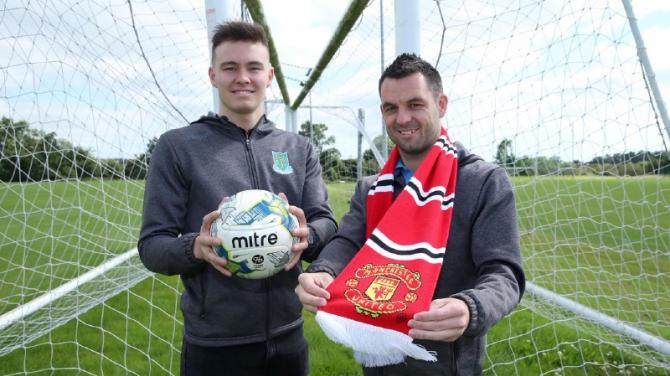 THE Manchester United blazer that hangs in David Jeffrey’s wardrobe is among the most prized possessions from a long and illustrious career in football.

And now the ex-United schoolboy and youth team player is preparing to roll out the red carpet for the latest bright young stars from Old Trafford.

As one of two exhibition challenge games in the SuperCupNI international youth tournament, Manchester United will take on Ballymena United at Under-23 level on Monday, July 29 (KO 7.30pm).

“It is an honour for me and for everyone connected with Ballymena United to welcome a Manchester United team to the Showgrounds,” says Sky Blues boss Jeffrey who is currently guiding his players in their European adventures in the Europa League.

Ahead of Thursday’s latest qualifying tie against Malmo in Sweden, Jeffrey has been taking time out to fine tune plans with his performance analyst David Douglas and other members of staff for the visit of Manchester United.

“This is a tremendous opportunity for the talent we have at our club. They will have the challenge of facing the best talent when you consider the calibre of player at Manchester United at Under-23 level,” he says.

“I have fond memories of my time at Manchester United as a 14-year-old schoolboy, on through as an apprentice and then as a young pro. Unfortunately I didn’t go on but I am proud to have been there and the club blazer still hangs in my wardrobe. It is one of my most cherished possessions.”

Jeffrey’s teenage first team defender Kofi Balmer – last season’s Young Player of the Year in Northern Ireland - will be one of the players on show in the home town line up.

Balmer played for County Antrim in the SuperCupNI as did his club captain Jim Ervin, who is hoping to have a part in the game as one of the permitted overage players.

Jim featured for his County at Junior level in 1999 and 2000 along with Northern Ireland captain Steven Davis and a Showgrounds legend Albert Watson.

“I recall playing for Northern Ireland against Brazil in the Elite competition in 2003,” says Jim. “We met them at Windsor Park in the 21st anniversary year of the event and it was a terrific occasion.

“Fernandinho was in that team which was coached by Branco, a World Cup legend.

“That was a special moment in my young career and I know that playing Manchester United’s finest will be the same for our aspiring talent.”

Jim is now involved as a coach with the County set up and has seen talent such as Balmer coming through the ranks.

Balmer, who made his senior Ballymena United debut at the tender age of 16, is still only 18. He has captained Northern Ireland at both U-19 and U-21 levels.

Kofi, from Mossley, Newtownabbey, featured in the County Antrim Junior team that lost to eventual winners Right to Dream of Ghana in the 2015 semi-final and hen missed out to Liverpool in the 3rd place decider. By 2017 Kofi had stepped up onto the Premier stage.

“I remember both years very well. As a young teenager those five days at the tournament are the best of your life, playing football every day.

“Two years ago we won the Globe by beating Brazilian side Osasco and only missed out on competing for the cup on goal difference to Newcastle United.”

Tickets for the Ballymena U-23 game will be available shortly and purchase details will be released as soon as possible. Entry to the game will be £10 for adults and £5 for under-16s.

Before that Coleraine Showgrounds will host an U-21 game between Rangers and Manchester United on Saturday, July 27 (adults £7, U-16s £4).