Parting of the ways confirmed 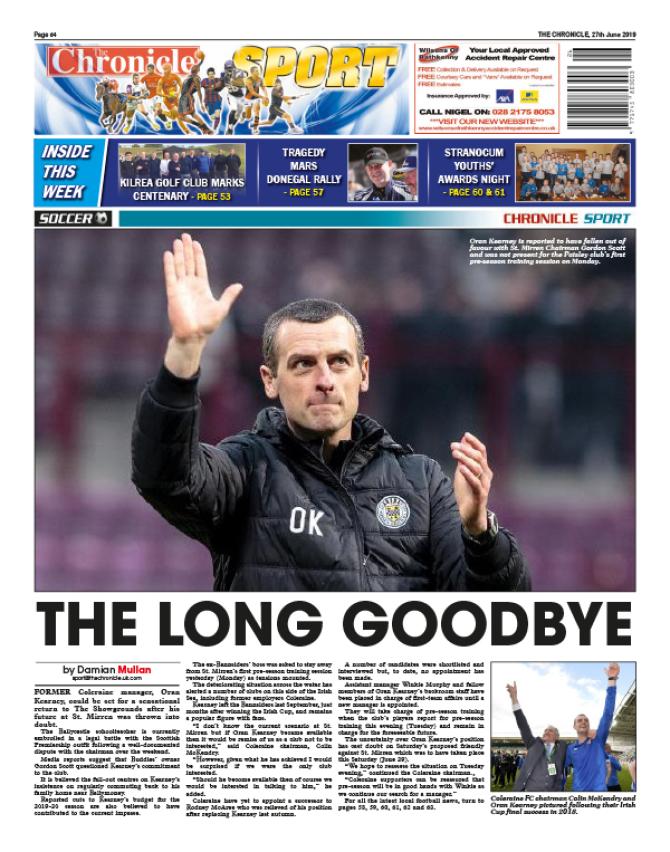 The back page of this week's Chronicle.

FORMER Coleraine manager Oran Kearney says he is 'proud' of the job he did at Scottish club St. Mirren but admits that he felt that 'his time was up.'

The 40-year-old took to social media on Wednesday, just hours after the club released a statement confirming his departure.

Kearney, who led the Bannsiders to Irish Cup success before leaving to accept the manager's position at The Buddies, spent ten months in charge at the SPL club.

"I am very proud of the job I did and the turnaround I made, I'm just sad not to be seeing it though."

In a short statement confirming the news, St Mirren said they 'wish to thank Oran for his time in charge and wish him every success in the future.'

Former captain Jim Goodwin is favourite to become the club's 10th manager in just over nine years, but there has not been any official contact between the clubs.

There had been rumblings that some St Mirren officials were unhappy with Kearney's commuting from his home in Ballymoney to Paisley while it has also been claimed that the manager's budget has been cut for next season.

Kearney's exit from St. Mirren has increased speculation that he is poised for a return to former club Coleraine who are yet to appoint a successor to Rodney McAree who left the position six weeks ago.

Coleraine chairman Colin McKendry has made no secret of the fact that he would be keen to speak to the Ballycastle schoolteacher about the vacant manager's position at the Showgrounds.

Speaking to this newspaper on Monday, McKendry admitted it would be 'remiss' of the club not to talk to Kearney should he no longer be employed by St. Mirren.

St Mirren were scheduled to play Coleraine in a pre-season friendly on Saturday, but that has now been postponed.