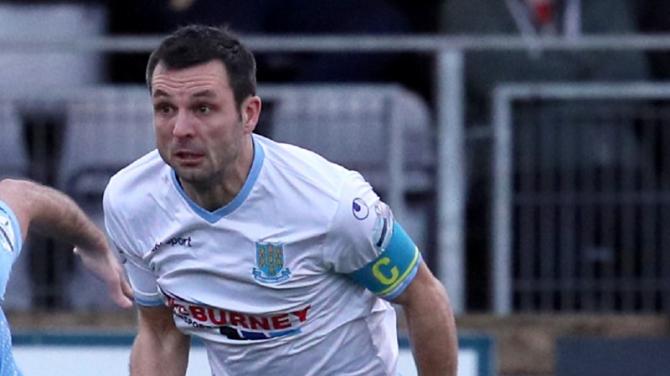 BALLYMENA United go into Europe on Thursday night, taking on NSI Runavik, from the Faroe Islands, at the Showgrounds in the preliminary round, first leg (7.30pm).

David Jeffrey’s Sky Blues warmed up at the weekend with a 2-1 win over Barry Town United at Dixon Park in a per-season friendly.

On target for Ballymena were Leroy Millar and Ryan Mayse.

United will travel to the Faroe Islands for the second leg on Thursday, July 4.

The official Ballymena United party have chartered a plane for next week’s clash.

Scores of United supporters are making their way to the venue via various means.

Speaking to Guardian Sport this week United captain Jim Ervin said they will be taking one game at a time.

He said NSI Runavik are halfway through their season, giving them the edge regarding fitness.

The defender is aware that victory over the Faroe Island opposition over the two preliminary legs would give them a money-spinning clash with Swedish side Malmo in the first round.

But he was quick to point out next game in his thoughts, this Thursdsay night, against NSI is the only thing in his, and his side’s radar.

“I never look too far ahead,” he told Guardian Sport. “We have two extremely difficult Europa League matches coming up and we will take them one at a time.”

The United captain said he and the club are delighted at being able to play their home European tie this time round at home.

Back in 2017, due to the pitch not being the specified European measurements, the Sky Blues had to play their home tie with Norwegian club Odds BK at Seaview.

“But not this time,” said a most pleased Ervin.

“The Ballymena United fans will be able to enjoy their European nights on home soil - at the Showgrounds,” he said.

Ervin has been a star performer since joining United from Linfield four seasons ago.

The skipper admits he wondered about his future after wrecking his cruciate for a SECOND time.

That serious injury was sustained back in the 2014 Irish Cup final against Glenavon at Windsor Park.

“I did question myself at the time,” recalled Ervin.

“But hard work, dedication and sacrifices got me back playing again.”

And he certainly has not looked back.

Ervin, who is 34, had a superb season for the Sky Blues last time round - and seems to be getting better each season.

Again he collected a number of Player of the Year awards.

NOTE - Season tickets and BUYA passes will not be valid for this fixture.

Supporters normally located in the directors box will have to sit elsewhere as UEFA want it closed to home fans.

Ballymena United have signed 22-year-old Ross Lavery from Cliftonville on a three year deal. The left sided player was seven seasons at Solitude.

Manager David Jeffrey said he has signed a a young man of great character and integrity.

“We have brought in a young man who is tremendously versatile and can play left side and in the middle. We have signed a great player and an absolutely outstanding young gentleman,” said Jeffrey.

Defender Conor Quigley misses the start of the season after breaking his foot in the weekend friendly with Barry Town United.

Their Stadium (Vio Lokin) capacity 2,000 is not approved by UEFA so Runavik play UEFA Europa League matches at Torsvollur in Torshavn or Svangaskaro in Toffir,

They are currently top of the League on goal difference.

Their manager Gudjon Thordarson was appointed on January 1 this year.

Last season the No. 10 scored a hat-trick for Runavik against Hibernian in the first round of UEFA Europa League.