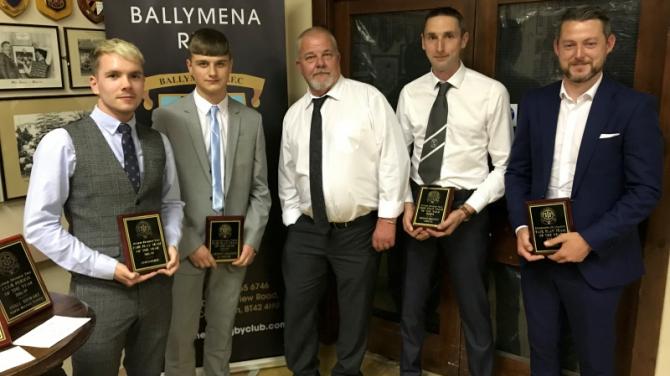 The 17-year-old took top honour in Division 3 ahead of team colleague Mark Butler.

At the evening Dunloy won the Fair Play Team of Year.

He was full of praise for the League’s Billy McIlroy for his 54 years faithful service in all things admin.

Ian pointed out that Friday night’s Premier bash was the first in 41 years out of the now closed Michelin Athletic Club.

The Chairman praised the League’s represenatives on the IFA and County Antrim FA.

She also thanked the Referees, managers and coaches.

Ballymena United Vice Chairman Don Stirling echoed these sentiments before presenting the League with a cheque from the club.

Glenn Boyd, from Ballymena RFC, welcomed all to Eaton Park congraulated the winners and wished all teams success in the new season.

League secretary Billy McIlroy thanked Council for all their help throughout the season.

He, too, praised the Referres and volunteers, pointing out without them the League would not exist.

Billy said there is concern about the IFA’s proposed plans to shake up the Leagues.

He said there are some good plans in the pipeline - and some not so good.

“We will keep you posted with all that is going on,” Billy told the gathering.

He took a bit of the shine off the night by reminding teams to take good care of the silverware they had won - as four Cups have gone missing in the past two years!

Dunloy won it in the Interemedaite section.

Intermediate Manager of the Year was Bangor’s Hugh Sincair.

Ross is well known in this area for his connection with Galgorm Castle Golf Club.

Where the Cups went

Intermediate Player of the Year was Ben Roy (Bangor).

Bangor won the Connon and the McReynolds Cup.