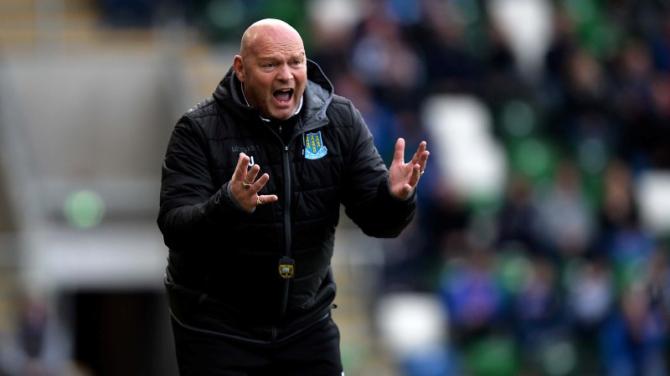 BALLYMENA United manager David Jeffrey said his side must be ready to do battle with Glenavon this evening (Tuesday) - as they bid to secure second spot in the Premiership (7.45pm).

The Sky Blues need a point to put the finishing touches on what would be a remarkable achievement with a squad put together as the start of the season.

But Jeffrey, who has seen and done it all before, is keeping his feet, and United’s, firmly on the ground.

“There is still work to be done. No one is getting carried away,” he stressed.

The manager pointed out that Glenavon are still very much in the running for second place. And the fact that they hammered League champions Linfield 4-0 at Windsor Park at the weekend is a serious warning.

Jeffrey made it clear that nothing is guaranteed for his side against Glenavon and Crusaders.

But a point tonight will be enough to take United over the line and guarantee them second spot and automatic entry into Europe.

“Glenavon will be coming here definitely seeking victory,” he said.

The manager added there has been a lot of talk about United doing this and that. He said talk does not get his side over the line - its points that do that.

He said he is totally focused, and resolute in about what they have to do.

“I am not getting carried away. You know we talk about what we have done when we have done it, not what we would hope to do,” he declared.

Jeffrey is guaranteed a third place, which he said is a nice feeling.

“Can we go and improve this come Tuesday night,”? he asked.

Jeffrey said the fact Glenavon beat Linfield sends out a big message to Ballymena - a big message. “We’ve got to be ready.” he concluded.

This Saturday Ballymena are at home to Crusaders in the closing match of the season (3pm).

United News - On Saturday after the Crusaders game the annual Supporters Clubs’ Awards will be presented in the Des Allen Suite (5.30pm)..

Tickets costing £10 each are on sale tonight at the Showgrounds and at Stirling Trophies in Queen Street (Wednesday to Friday).