A richly deserved honour for 'Monty' 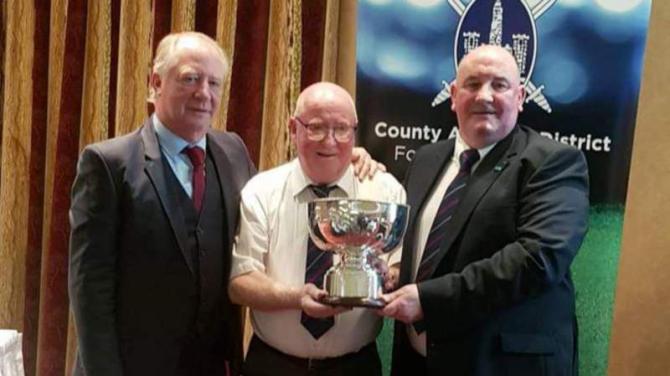 At the recent County Antrim FA dinner and prize evening he received the Donald Fry award for Services to Football.

And it was his colleague, Davy King, who is Chairman of the local League, and Chair of the Junior Shield Committee, who made the presentation.

Davy said the highlight of the County Antrim night out was being able to present the award to ‘Monty’.

“At long last Brian is receiving the accolades he deserves for 50 years of unwavering service to football and the Ballymena Saturday Morning League,” outlined Davy.

“ And I know he’s more than pleased at receiving such a reward and gratitude from his peers in the game.”

Davy and Monty have worked together for the past 39 years and the progress of the BSML and its clubs has been immense for a League which started with six teams in 1969.

“Long may it continue,” he said.

Davy, in his ultimate year as Chairman of the Junior Shield Committee, said he hopes he has represented the BSML and Ballymena to the best of his ability over the previous four seasons as Vice and then Chairman of such a prestigious Committee.

“The members of this Committee have, over the years through our love of Association Football, become good friends both inside and outside the beautiful game.

“I thank them all for their support and advice.” he said.

Davy praised the Association’s support of NI Children’s Hospice in their unwavering work and support of their patients and their families.

He concluded by saying he has still a couple of months remaining of his Chairmanship, including the upcoming Junior Shield Final and several important meetings.