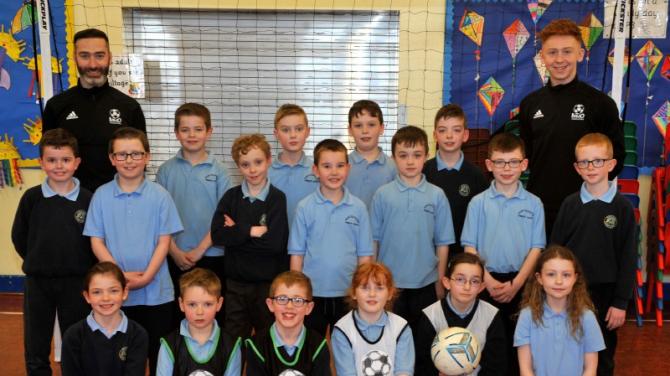 Maurice McDowell, of MMD Coaching, and his colleague Jack Millar, took the two hour session at which the youngsters were taught fundamental movement skills and multi sports.

Meanwhile, this Easter two football camps will be taking place at Wakehurst in Ballymena.

“There will be a football only camp on the playing fields and a multi sport camp in the Community Centre and the pitch,” outlined Maurice.

“The thinking behind it is to provide something for the whole family rather than just the football mad child of the family with the multi sport option giving children the chance to try various things such as basketball, volleyball, dodgeball, tag rugby, unihoc, quick cricket and dance (hip hop).”

At both camps there is a top prize on offer for the top player!

“For the Easter Camp I have two great prizes,” outlined Maurice.

Maurice met up the Northern Ireland captain Steven Davis recently when the NI team was at the Culloden Hotel - and the skipper kindly agreed to donate both jerseys.

“I am very grateful to Steven for this very sporting gesture,” he said.

Maurice has branched out on his own after being employed for eight years working as a Primary School coach for the Irish Football Association delivering PE for boys and girls in the Ballymena area.

During this time Maurice visited most schools, with up to 1,000 children receiving specialist PE sessions/ after schools clubs/ player development programmes.

“I am still working towards providing the boys and girls in the Ballymena area specialist coaching with the main aim to improve their confidence and competence when participating in sport,” Maurice told Guardian Sport.

“This which hopefully help them foster a love of sport and encourage lifelong participation as well as improving their general health and well being through an active lifestyle.”