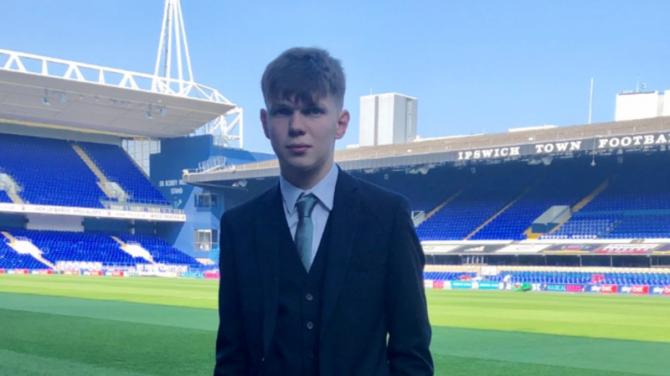 On Friday the 16-year-old centre-half put pen to paper on a two year scholarship and one year professional deal.

He will move across to Ipswich at the end of June.

Cameron will continue his studies completing a B Tec in Sports Science at St. Joseph’s private school along side his football training at Ipswich Academy.

The former Cambridge House Grammar School pupil had attracrted the interest of other clubs in England.

But he decided Ipswich Topwn FC was where he wanted to go.

Cameron plays for Linfield FC; he has done so since the age of 10 years old.

He kicked off his career with Waveney Youth at a very young age before joining Ballymena United, Carniny Youth, Coleraine Youth and then Linfield.

He was coached by Gary Boyd.

Cameron is part of the Northern Ireland international squad.

Last year he captained the SuperCupNI team to victory in the final at Ballymena Showgrounds.