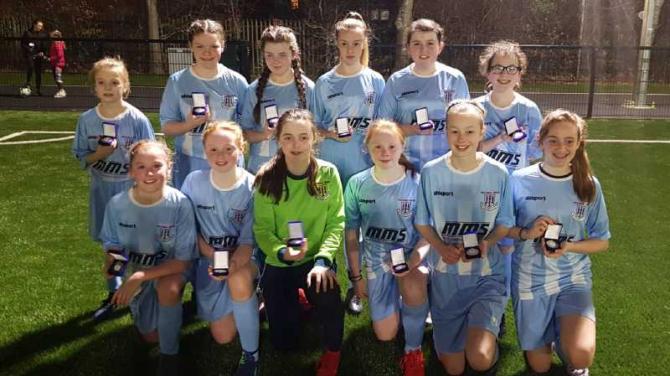 IT was heartbreak for Ballymena United Allstars Under 13s as they fell to a 2-0 defeat against Glentoran in the final of the South Belfast Youth League Cup.

In great conditions on Friday the girls took to Ulidia Playing Fields in Belfast full of confidence after an excellent season.

It was a very open and very even first half, with both sides having chances to break the deadlock.

Glentoran had the first opportunities with two shots on target, both expertly saved by Blues ‘keeper, Sarah Porter.

At the other end, United were pressing well and had two great crosses fizzed in to the box by Ella Graham and Faith McCormick, but none of their team mates were able to connect and convert.

The teams were level at the break but Ballymena raced out of the blocks in the second half, looking for the breakthrough.

And they came agonisingly close. A great corner delivery from Gemma McClelland was met powerfully at the near post by Sarah Livingstone but her header went just wide.

This sparked the Glens into action and just a few minutes later, they won a corner of their own.

Ballymena were unable to clear and it was Glentoran who broke the deadlock.

Allstars refused to lie down and continued to press for the equaliser.

With 10 minutes left to go, the referee awarded Glentoran a free kick for a deflection that she interpreted as a hand ball.

With a wonder strike that gave the goalkeeper no chance at all, Glentoran put themselves firmly in the lead.

Again, Ballymena continued to fight but couldn’t find the breakthrough.

Allstars coach Zoe Cummings said the girls are disappointed for having worked hard all season and given their everything, they really wanted to bring the silverware back home.

“Glentoran took their chances and we must congratulate them on their victory,” said Zoe. “But we also congratulate our Allstars and celebrate their achievements this season. They have really developed their skills and come together as a team, and are now a formidable force in their age group.”

The coach said their disappointment is testament to their love of football, their fiercely competitive spirit and their pride when wearing their Sky Blue shirts.

“ I can’t ask for anything more. The whole Club is very proud of them and we know there is more to come from these players in the seasons ahead, said Zoe.