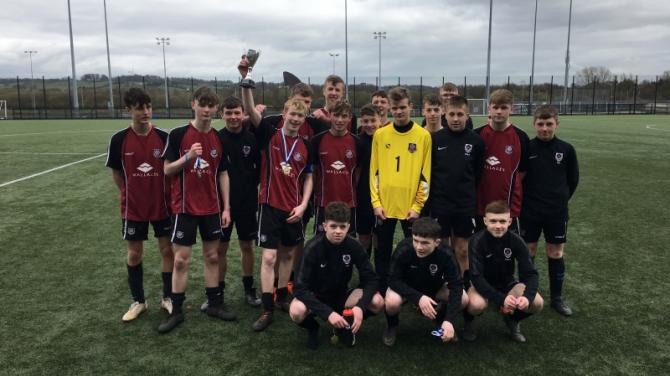 CULLYBACKEY College’s Year 8 football team recently booked their place in the final against Slemish College after an impressive 7-0 victory over Sperrin Integrated College.

The boys got off to the best possible start after Robbie Spiers finished off a flowing move down the right-hand side. This was the beginning of 20 minutes of fast attacking football which brought about four more first half goals from TJ Greer, James Orr, Kenzie Meharg and another sublime finish from Robbie Spiers.

In the second Jamie Archer put the icing on the cake and he coolly finished from inside the area to round off an impressive victory.

Next up, for the Year 8 is a final against a formidable Slemish team who inflicted a heavy defeat on the Cullybackey Boys in the League earlier this year.

Meanwhile, in a rip roaring Mid-Antrim final at Ballymena Showgrounds, Cullybackey College’s Year 9s defied all odds to clinch their first piece of silverware at school, defeating St Killian’s 5-4 in a memorable final.

Buoyed on by their 120 strong pupil support, the ‘Men in Maroon’ performed with total commitment throughout.

Cullybackey got off to a dream start when Isaac Wylie, scored inside the first three minutes. One became two, just two minutes later, when Wylie scored after a wicked deflection from a goalkeeper’s clearance.

Captain Wylie completed his hat-trick before half time, before the opposition pulled a goal back.

Two quick fire goals at the beginning of the second half and all of a sudden it was all square at 3-3. With the game on a knife edge, the tireless Luke McGaughey set up Isaac Wylie for the fourth goal of the game.

Soon after it was 5-3 through Robbie Spiers. Despite conceding a fourth Cullybackey stood firm to claim that elusive Cup.

The Year 11 boys ended their year with a battling 3-0 win against Dunclug College at the Ballymena Showgrounds.

Cullybackey, with the aid of a stiffening breeze, took the lead after Noah Stewart found himself in a world of space inside the Dunclug box before coolly slotting home.

As the first half was fizzling, out Scott McCullough saw his speculative effort deceive the Dunclug goalkeeper from all of 30 yards to give Cullybackey a 2-0 half time lead.

The second half Dunclug pushed for a way back in, but in Ben Turtle and Cameron Kerr, Cullybackey had two giants that were not in the mood for allowing anything past them.

They were ably assisted by an alert Nathan McMullan and two full backs in Leon Coulter and David McKay, whose energy snuffed out any danger on the flanks.

As the game drew to a close Dunclug were reduced to 10 men. Cullybackey controlled the game until the end, minus one or two scary goal mouth scrambles, and added a third through a neat Diego Fletcher finish.

Great end to a frustrating, although successful year and something to build on as the boys enter into the Northern Ireland Cup for final time as a team next year.