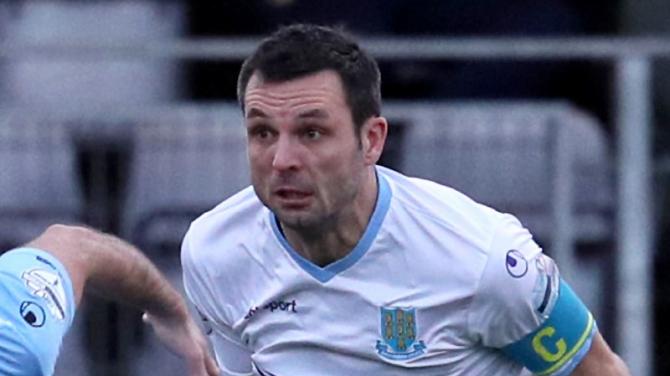 David Jeffrey’s Ballymena United are well aware leaders Linfield are nine points clear - but the Sky Blues intend doing all in their power to put the brakes on the Windsor Park men’s title charge.

The fact United sit second is testimony itself of the excellent job Jeffrey and assistant Bryan McLoughlin have done since coming to Ballymena.

Both men will be disappointed, though, at United slipping up in their last two Saturday home games, losing 2-0 to Glentoran and 2-1 to Warrenpoint Town, allowing the Blues to take command again at the top of the table.

But Jeffrey’s remit at the start of the season was a top six finish, and another tilt in Europe.

His side have been excellent, and the 19 game unbeaten run - 17 wins and two draws - smashed all records, and is still being talked about.

With Irish Cup semi finals taking place at the weekend both United and Linfield had a free Saturday.

Now Ballymena get focused on trying to reduce Linfield’s lead to six.

United captain Jim Ervin admits it is going to be a difficult game - but said he and his colleagues intend giving their all.

“Games between us have been very tight all season,” Ervin told Guardian Sport.

“We are very keen to hold on to second spot, and are well aware Crusaders are now breathing down our necks, as they chase runner-up spot.”

Attacking defender Ervin said a win over Linfield would keep their race for runner-up spot intact.

At present Linfield are on 77 points, nine ahead of United who are on 68. Next are Crusaders, who knocked Coleraine out of the Irish Cup, winning 2-0 in the semi final at The Oval, who are on 64 points. Fourth are Glenavon on 60.

It should be quite a finish to the League Championship - with just five games remaining!

United supporters have been superb throughout the season.

Jeffrey has sang their praises on many occasions. How refreshing it was to see a packed home stand when Warrenpoint Town came to the Showgrounds at this stage of the season! A win on Friday night would be such a boost for the Sky Blues fans.

“These games are really exciting for the supporters,” said skipper Ervin.

“These are the games we all like to be involved in.”

And he recalled for many of the United side, which has only been together almost one season, it will be a very new experience.

“As long as they are learning along the way, it will stand them in good stead for the future,” he concluded.