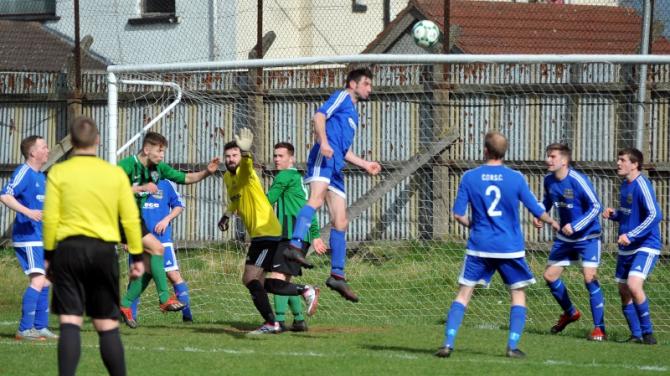 Saints have been beaten finalists the last three seasons in the Ace Cup and they moved one step closer to making amends for this with Kavan Keenan heading them past Clough in a tight tie.

The home side started on the front foot as the probed at the Clough defence with Peter McReynolds and Brian Paul Donnelly both having early efforts.

Peter McReynolds was causing the Clough defence problems with his runs from deep and on one of these runs he latched onto an Alan Telford through ball and rounded Colin McCaughern only for a great last ditch tackle from Colin Byers to clear the danger.

Barry Hamill then drilled in a free kick which Colin McCaughern held well.

Clough looked happy to stifle and contain Saints and as the half wore on, they continued to frustrate Saints and with Frazer Young and Dean Magill a threat on the break they remained well in the game as the half finished in stalemate.

The second half again saw Saints make the running with Clough happy to frustrate Saints and to their credit they limited Saints to half chances for the majority of the half with Brian Paul Donnelly coming close as he hit the side netting with their only real chance early in the second half.

As the half wore on Saints forced a serious of corners with Alan Telford and Barry Hamill delivering well and causing issues with Kavan Keenan heading into the side netting when left free.

Clough did not heed the danger though as 12 minutes from time Saints got what proved the winner.

Barry Hamill whipped in a deep corner from the right and Kavan Keenan broke free and powered home his header at the back post.

Clough then threw everything forward with long throws from Cameron Waring causing Saints a lot of problems, but Saints defended well to see out the tie and progress to the semi finals.