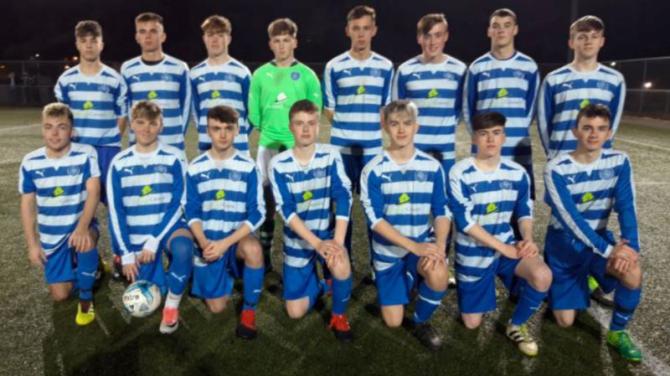 TONY Shaw’s U18s turned in the Performance of the Week by reaching another Cup semi-final with a five-Star performance in the quarter final against Bangor Swifts.

On target for Northend was Chris Fullerton with a hat-trick, with Aaron Campbell and Chad Shaw weighing in with a goal a-piece.

The Northend boys played some fantastic football against a much bigger and stronger side.

After a breakaway Carnmoney won a corner which Northend failed to clear.

And a Carnmoney player was able to poke the ball home just before the break.

In the second half Northend again started off playing great football and finally got their reward for all the hard work.

A fantastic passing move, in which the majority of Northend players touched the ball, saw the ball fall to Reece McKane who shot into the far corner, to make the scores level.

This really spurred the Northend players on and they pressed looking for a winning goal.

With 5 minutes to go the boys got their reward when again the ball fell to Reece in the box and he fired home to make it 2-1.

A great credit to both teams playing despite the horrendous conditions.

A great passage of play down the left saw Nikodem Byqek put a ball through to Shay Butler who calmly slotted the ball past the Chimney Corner keeper.

With half time approaching the boys conceded from a corner. Half time 1-1

The second half was not to be our night as we conceded another two goals. Full time 1-3

Northend reached the semi-final of the cup last Monday night with a 5-star performance against a determined Bangor.

Aaron Campbell opened the scoring with a cool finish. Half time 0-1.

Bangor equalised second half only for Chad Shaw to score with a great finish to restore Northend’s lead.

With 20 minutes remaining Northend brought on Chris Fullerton with great effect as he settled the game with a hat trick of goals the first two with great finishes.

Another semi-final for the boys to look forward to in another good season. Full time 1-5