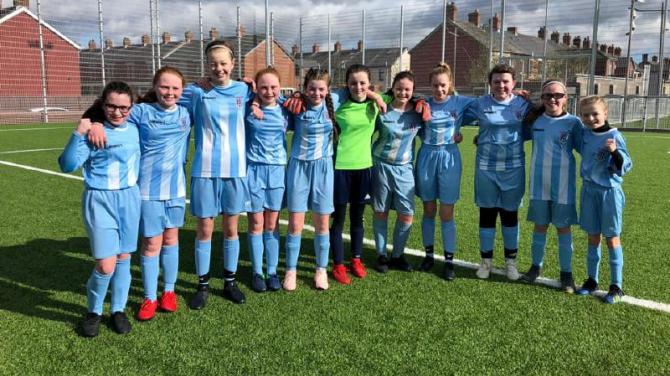 BALLYMENA United Allstars LFC Under 13s booked their place in the final of the South Belfast Girls Youth League Cup with an outstanding victory over Banbridge Rangers LFC on Saturday.

They took on one of the strongest teams in the League at a cold but dry Olympia in Belfast but they were not over awed.

They started really positively with a number of sharp passes down the right.

After only 3 minutes, one of the passes found the captain for the day, Courtney Lindsay and she slotted home into the bottom right corner. Advantage Sky Blues!

They had a couple of half chances after that but it remained 1-0 at the break. The second half was end to end but the Sky Blues defence remained strong.

Banbridge came close to finding the equaliser two minutes from time. They were allowed too much space and time on the ball but a super save from Sarah Porter meant the Allstars would not be denied.

It was a superb defensive performance from the team and a great display at the back from Nicole Rainey who was deservedly named ‘Player of the Match’.

The players are now looking forward to the final – details of which are to be confirmed – and will fear no-one after this fantastic display.