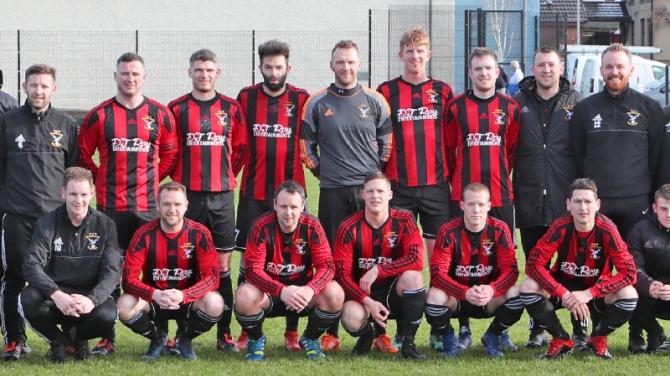 THESE two teams have battled out some thrillers in past seasons but once again Harryville Homers proved to be too strong for Clough as they edged them out by the odd goal in five to remain on course for seven in a row.

Homers opened the scoring in clinical fashion after only three minutes when Chris Dowie drilled the past Colin McCaughern to give the Champions a dream start.

Despite the great start Homers did not kick on as Clough dealt well with any danger threw at them.

Former Clough striker Robbie Sutherland almost doubled Homers lead nine minutes before the break but his shot from a narrow angle was well saved by McCaughern.

Clough got themselves back into the game soon after this when David Gage bundled the ball home from close range despite appeals from Homers of an offside.

Homers hit back straight away regaining the lead before the break when good work from Robbie Sutherland saw him find Darren Campbell in the box.

And his deflected shot crept past McCaughern to make it 2-1 at the break.

Clough had the first chance of the second half with Jordan Leighton almost levelling the game.

But his deflected shot came off the top of the bar.

At the other end Andrew Simms almost got Homers third but his effort was saved by McCaughern.

The visitors had a great shout for a penalty with 20 minutes to go when a Richard Reid goal bound effort looked to be blocked by the hand of a Homers defender but the referee waved away the protests.

Homers opened up a two goal lead with seven minutes to play when a low shot from Ryan Stewart was diverted into the net by Gary Bonnes to make it 3-1.

Clough kept pushing and got a goal back in the dying seconds when they were awarded a spot kick and Reid made no mistake but it was too little too late as Homers seen the game out for the win.

Despite not being at their best Saints run out convincing winners against Carniny to remain top of the Division.

Seven minutes into the game Saints took the lead when Barry Hamill clipped a free kick to the back post and Niall Swann rose above everyone to power home the opener.

Saints were well on top and could have added more goals but for some sloppy play in the final third.

Ryan Wilkinson almost doubled Saints lead on the half hour mark but his volley from a Philip Lynn cross went narrowly wide.

Just before half time Saints did double their lead when a corner kick from Hamill was turned in at the near post by a Carniny defender to make the score 2-0 at the break.

Saints again dominated the second half with Carniny rarely threatening the Saints defence.

Connell Lemon should have made it 3-0 but he chipped the ball over when left with just Macauley Cairns to beat.

Brian Paul Donnelly came off the bench and injected more life into Saints and it was him who made it 3-0 with 18 minutes to play when he raced onto a Ciaran McGarry through ball and showed great composure to slot the ball home.

Carniny were then awarded a penalty kick when Sam Bennett was fouled in the box, but Saints keeper Leon Bonnes saved well from Neil Weir to keep Saints clean sheet intact.

It was soon 4-0 when Donnelly pounced to fire home from close range after a cross from Conan Dunne was parried.

Liam Cassley completed the scoring for Saints when he rose above everyone at the back post to head home a cross from making it 5-0 and sealing the win for Saints.