Seven Towers make it back to back wins for first time 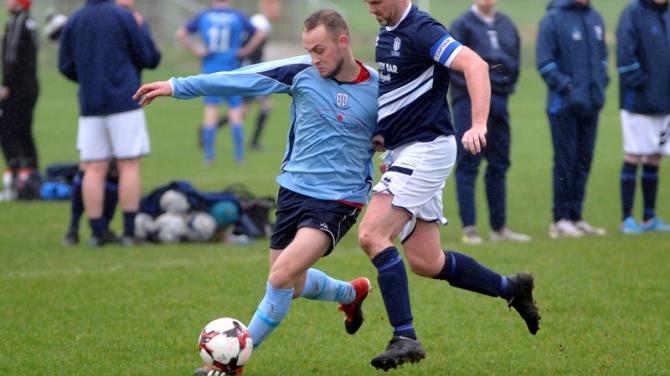 SEVEN Towers made it back to back league wins for the first time this season to record another much needed win in testing conditions in Harryville.

The leagues bottom two teams going into play were evenly matched early on with Penarol, playing with the wind, shading the early exchanges.

Towers midfield slowly got to grips with conditions with Mark Graham driving them forward and Ryan Brady beginning to dictate from deep.

It was a long Brady pass that found Phil Peoples down the left who bravely beat the defender to square for Matt McAnally to rifle home the opener.

This settled Towers who doubled their lead shortly after, ever alert Ross Hunter pounced on a short back pass to round the keeper and finish smartly into the far corner.

Penarol responded before the half to put Towers under big pressure. It was only for a superb treble save from Jamie Stevenson that their two goal lead was maintained.

Penarol pass down inside right channel freed Paul bell whose shot was parried to Craig Young who was twice brilliantly denied. Towers had the wind in the second half but they took their time adjusting as the game became scrappy.

Penarol to their credit kept pushing in vain to find a goal. Towers third killed the game as a contest.

Corner from Brady was flicked on at front post by Peoples to McAnally at back post who scored high into the net.

Towers dominated from this point missing several guilt edged chances before Ross Hunter got the goal of the game and his second with a delightful chip over the Penarol keeper.

Towers back three of McGarry, Esler and Quinn seen it out to record a rare clean sheet, and put the shine on a solid Towers victory.