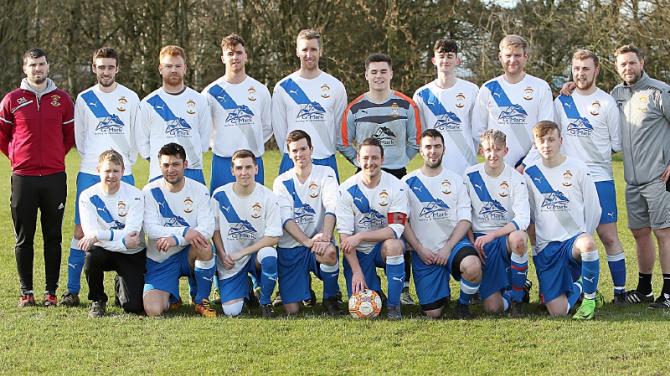 A hat trick from top marksman Paul McNeill saw Harryville Homers past Top Four chasing Raceview to keep up their charge for seven League titles in a row.

The home side came out of the blocks quickest as they took the game to Homers.

But the Champions weathered the early pressure before taking control of the game and went close when a free kick from Darren Campbell was tipped round the post by Raceview keeper Peter Gillespie.

Ten minutes later Homers took the lead when Alan Rainey’s shot was saved and McNeill followed up to score from close range.

McNeill, Ryan Stewart and Jason Stewart all went close to adding a second goal before the break for Homers but all three failed to find the net as the half finished with Homers holding a slender 1-0 lead.

Five minutes into the second half Homers doubled their lead when a cross from Andrew Simms was palmed into the path of Robbie Sutherland who made no mistake making it 2-0.

Homers were well in control now and clinched the victory with 19 minutes to go when McNeill slid in to divert home a Sutherland cross.

McNeill then completed his hat trick in the dying minutes when he rounded the keeper to make it 4-0 and cap a great win for Homers.

All Saints kept up their title challenge with a comprehensive victory over Ballykeel.

The visitors almost shocked the League leaders in the opening minutes when sloppy play let in Jordan Kenny but Brian Martin came out and saved well at his feet.

At the other end Stephen Watson saved brilliantly to keep out Ryan Wilkinson.

The opening goal came on 19 minutes when a free kick from Chris Wilkinson from 35 yards deceived the ‘Keel keeper as he failed to keep it out.

Peter McReynolds then had a shot blocked on the line before he made a brilliant run into the box and was chopped down when he was about to shoot and a penalty was awarded.

Alan Telford stepped up and fired his spot kick into the corner of the net to make it 2-0 to Saints at the break.

Saints started the second half on top again and got the third goal 12 minutes in when Philip Lynn nipped in at the back post to poke home an Emmet Killough cross.

Chances were then missed by Saints with McReynolds, Wilkinson and Stephen Sexton all misfiring.

Ballykeel then got a goal back with 12 minutes to go to set up a tight finish when Charlie Taylor broke clear and crossed to the back post for Gary Freeburn to drill home.

Saints had the final say though when Brian Paul Donnelly played a nice one two with Ronnie Marshall and then brilliantly curled into the top corner making it 4-1 and sealing the win for Saints.

These two teams have met twice already this season in two tightly contested games and on this occasion Ahoghill Thistle came out on top to ensure the title race is very much a three way tussle.

Thistle battled hard in the opening stages to get control of the game and their hard work paid off on 15 minutes when they opened the scoring.

Ryan Marks beat his man on the left hand side and crossed for Matthew Boyd to power a header in off the post and give his side the lead.

Twenty minutes later Thistle were pegged back when Seb Stafford nicked in at the back post to fire home an Ian Brownlee cross.

Both sides battled hard for supremacy after this goal but neither side could edge in front before the break.

The second half saw Thistle take control of the game and on the hour mark they got themselves back in front when Marks drilled a corner kick across the box and David Drmmond volleyed home into the right hand corner of the net. Ten minutes later Thistle opened up a two goal lead. Jack Millar beat the offside trap and dragged the ball back for Randal Reid to drill home from the edge of the box.

The win was sealed for Thistle five minutes from time when Drummond scored his second goal of the game this time from close range tapping home a good centre from Reid to make it 4-1.