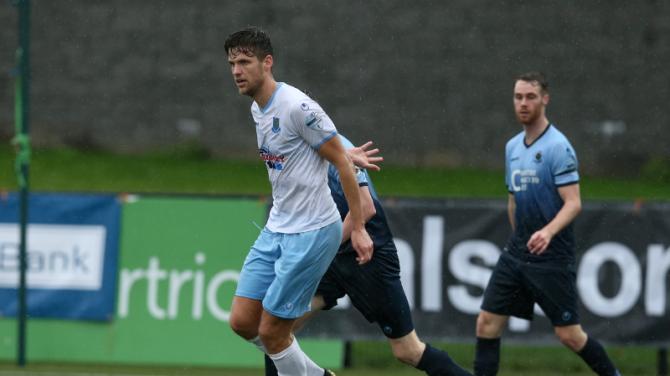 The 27-year-old was in Melbourne this time last year - now he is back in the Province just days away from the Sky televised show-piece in Belfast.

He came back to do best man at a friend’s wedding back in the Summer ....... and ended up signing a two year deal with David Jeffrey’s United!

Lecky, who stands 6’ 7”, is really enjoying his time with the Sky Blues.

He and team mate James Knowles were United’s representatives along with boss Jeffrey at last week’s League Cup press conference.

Speaking to Guardian Sport Lecky said the final is going to be a massive game of United.

“Me and my team mates are absolutely buzzing for it. After the semi win it was put on the back burner but now it has come around. I am really excited for it,” he said.

“It does not need build up. Linfield one, and us second in the Premiership. From our outlook there is no bigger challenge than coming to the back yard of the leaders and trying to topple them. It is a massive challenge. It is one we are going to relish. We want to put a performance and get a result,” he told Guardian Sport.

For the big striker it will be his first even Senior Cup final.

He said with Ballymena he is probably enjoying playing football the most in his career.

“David and Bryan (McLoughlin) have to take a lot of credit for that and my team mates, too, as to how well we have been playing this year,” he said.

“I don't think anyone could have predicted that it would have went so well for us. And just to be part of that is a pleasure and I am really enjoying it.”

* On Monday night, prior to the United v Portadown Irish Cup clash in Ballymena, Lecky collected the Seven Towers United Supporters Club ‘Player of the Month’ for January.