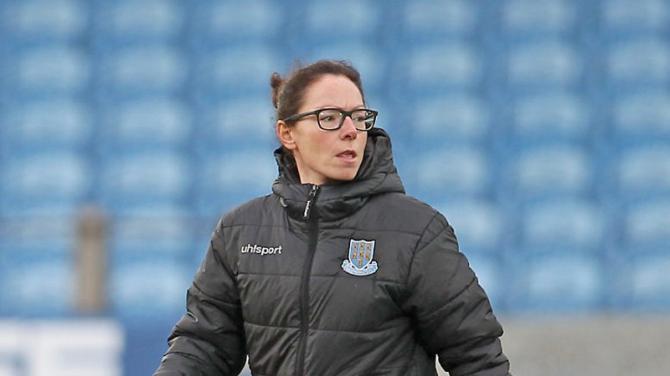 DAVID Jeffrey has said the input of strength and conditioning coach Julie Alexander on Ballymena United has been revolutionary!

The Showgrounds supremo made it clear that the Ballymena woman’s role has more than helped get United to where they are today.

“I've got to say, and not putting too fine a point on it, Julie's contribution to how things have changed this year with regards to training, and preparation has been revolutionary,” he enthused.

“She is a fantastic member of staff, who has fitted in very, very well.”

Julie has been at the Showgrounds for the past five seasons - but this season in particular has seen her really come into a league of her own!

The Northern Regional College sports teacher is really enjoying her job at United.

The former Dunclug College pupil is involved in the United set-up at training each Tuesday and Thursday, and match day each Saturday.

She said working alongside boss Jeffrey and his assistant Bryan McLoughlin is a great learning curve - and one which she is delighted to bhe part of.

Boss Jeffrey said he, and his assistant Bryan McLoughlin, have always looked to promote local people from the town and who back the club.

“And Julie was this hidden treasure, working along with Joe McCall, and working with our younger age group,” outlined Jeffrey.

“Bryan McLoughlin picked up on this and started discussions with Julie and she came and met with Bryan and myself. We looked at our training schedule and what could be do better, what could we do differently, what could we improve, and what new approaches were there.

“And so Julie along with Alan Simpson (‘keeper coach) Dean Campbell (video analyst) Gary Crosbie (physiotherapist) and David Douglas (performance analyst) work so very hard together and dove tail in, and the information we are getting on how players perform, how hard they work, the yards that they run it has been fantastic.”

Jeffrey said the team work has played a massive part in where they are this season.

“The contribution has been significant, ultimately it comes down to players, whether they will buy into what you are trying to do,” said Jeffrey.

He said Julie obviously has the respect and admiration of all the first team players and they really appreciate what she is doing.

“For example, we always have a warm up before training; but we now have a pre warm up warm up which was introduced by Julie,” said Jeffrey.

“It is benefiting us tremendously well and players we have brought in are most impressed with this additional piece of professionalism that we have added. Julie Alexander has been absolutely outstanding.”