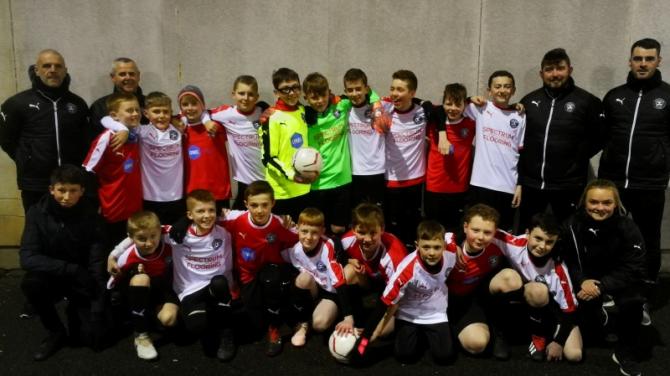 C4C Under 12s began their league campaign against Colinvalley on Friday night. A dominating second half display with goals from J. McKibbin and S. Park gave C4C the 3 points.

Both teams found it difficult to create chances in the first half as they tried to adapt their games to the strong wind. S. Gault showed excellent reactions in the C4C goal as he rushed off his line to clear from a Colinvalley through pass.

The second half belonged to C4C. J. McKibbin opened the scoring with a low shot from the edge of the box. J. Wright excelled on the left wing beating his marker with fantastic tricks and turns. He almost made it 2-nil with a weaving run before striking the bar. Five minutes from time S. Park pounched on a loose ball in the box to fire home.

A great team performance from C4C who a certainly looking forward to a successful season in the league.

Player of the Match: J. Wright

On Friday night the U13s played a strong Lisburn Rangers side. Central defender C. McQuillan was solid and cleared up some dangerous threats.

Lisburn Rangers came out fighting in the second half with a few attempts on goal. However, S. Erwin was in fine form for C4C keeping out any attempt threw at him .After much effort, R. McClintock got His well deserved goal. The match ended 3-0. MOTM: R. McClintock.

U16s v Immaculata - An early kick off for both sides on a really windy Saturday morning in Belfast.

C4C started the game brightly with Cammy McMullan and Ethan McLaughlin combining well to play in Matthew Worthington who went through on goal. His effort was saved and pushed wide for a corner.

A whipped ball into the back post was met by a towering leap by Jamie Morrow who nodded in to take the lead.

Immaculata gathered themselves and pushed forward, responding with a great solo goal from their number 9.

An excellent instinctive save from Ross McKillop kept it level, a weekly occurance from the C4C shot stopper.

Callum McKibbin driving forward down the left and combining with Matthew Worthington created trouble for Immaculata.

They pushed hard for an winner but some brilliant 1v1 defending from Niall Pogue stopped any attack.

A special mentioned to Jake Faulkner who cleared the ball off the goal line to keep it level.