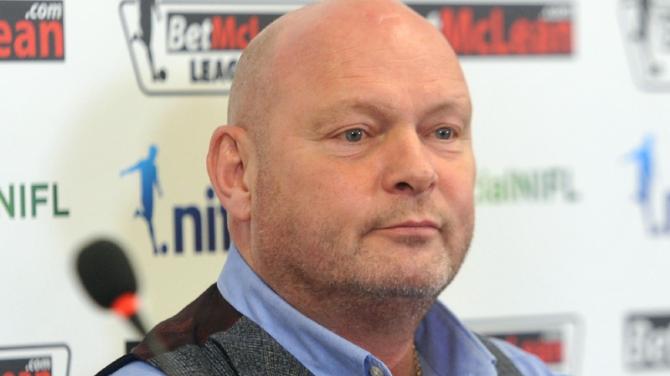 DAVID Jeffrey makes it quite clear his side are not going to Windsor Park this weekend just to make-up the numbers!

The Ballymena United manager knows exactly what lies ahead for his squad - but he assures all they intend giving everything against Linfield in the hope of bringing the BetMcLean League Cup back to the town.

Jeffrey got Monday night’s Tennent’s Irish Cup tie with Portadown out of the way.

At the time of going to Press the result was not known.

Now the former Linfield supremo, winner of 31 trophies during his time with the Blues, focuses fully on the plot to beat the Windsor Park side on their own home soil.

“The reality is we are punching above our weight,” he told Guardian Sport. “We are playing against the biggest club in Ireland whose resources far outweigh ours.”

Jeffrey said what United have done so far has been most commendable.

Referring to Ballymena’s brilliant win on the Shore Road in the League Cup semi the United boss said - “While we know we go in as underdogs, we went to Seaview and took on the League champions and did very, very well.”

Jeffrey made it clear that to be successful they will have to be at their very best on the day.

“And that is what we will be looking to do,” he declared. “ And if we are at our best and succeed, great, but in the first instance we are delighted to be this he final three years on the trot.

“We are not coming to make up numbers; we know exactly the battle we are in for. Linfield are the most talented team. They are ahead in the League by six points; they have had had some impressive performances of late, defensively they are immensely sound. I can wax lyrically all day long, but we are going to give of our best.”

For Jeffrey it will be the third successive time he has guided United to the League Cup - a remarkable feat in itself.

First time, back on February 18, 2017, United met Carrick Rangers at Seaview and won 2-0 with goals from Allan Jenkins and Conor McCloskey. Last year Ballymena met Dungannon Swifts in the final at Windsor Park - and were soundly beaten 3-1; sole goal scorer was Kyle Owens, now with Crusaders.

Jeffrey admits United were flat on the big day; the previous Saturday they had beaten high flying Cliftonville 3-1 in the semi-final ....... peaking too early and paying the price.

Saturday’s final has the makings of quite a clash.

The sides have met three times this season, Linfield winning twice and United once.

“Against Dungannon we were as flat as pancakes. Things were not right on that day,” recalled Jeffrey, who does not do defeat all that well.

Jeffrey and his hard working backroom staff will do all in their power to make sure all is well in their preparation plans for this weekend.

There will be a massive crowd at the final venue.

Linfield, disappointed at being knocked of the Irish Cup by Crusaders, will want to get their hands on the League Cup. But United will be equally as fired-up, anxious to put the bitter taste of last year’s defeat by Swifts out of the way for good.

Linfield boss David Healy knows he will be in for a busy evening on Saturday.

At the weekend his side showed great fighting spirit, coming back from 2-0 down at home to beat Coleraine 3-2.

In Londonderry United took on Institute and came away 2-1 winners.

Linfield top the Premiership table, with United second - six points behind but with a game in hand.

On Monday night United took on Portadown at the Showgrounds, a sixth round Irish Cup tie which had been postponed earlier due to a water-logged pitch. Now the countdown is certainly on. The final has been the talk of the town for weeks.

The Drumsurn man bagged his 17th goal of the season against Institute at the Brandywell on Saturday.

He and Adam Lecky - what a find he has turned out to be - will certainly give Linfield plenty to think about.

Jeffrey completely built his side at the start of the season, bringing in what he describes as “an exciting bunch of young men.”

“We purposely went out and got hungry young men, who wanted the chance to play regularly, players who understood competition and who very much wanted to share in the vision that Bryan and I had,” he said.

On Saturday this new-look United have the opportunity to really make their mark.