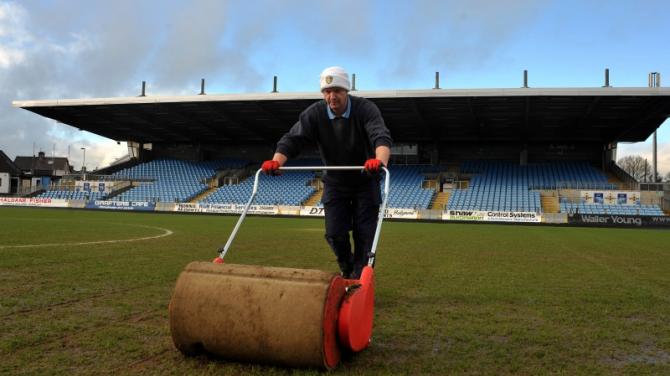 THE Showgrounds pitch is not playing ball - despite the £250,000 spent by Mid and East Antrim Council on trying to sort it out!

At the weekend Ballymena United’s Premier League match with Ards came within a heavy shower of being postponed.

A late pitch inspection had to be carried out after heavy rainfall the previous night - and in the end it was given the green light to take place.

As the game came to a close the heavens opened again and but for the fact that just nine minutes remained the pitch would have been declared unplayable.

Where exactly does the problem lie? Many United fans now believe the Sky Blues returned to the central arena too quickly after the grass was sown - but back then there was an almighty call to return as soon as possible as all home games were having to be played away!

The pitch does not look as though a quarter-of-a-million plus pounds has been spent on it - and that is being kind!

In places it resembles a quagmire - and Ards’ boss Colin Nixon, whose side was beaten 4-1 by Ballymena United, who are second placed in the League, thought before kick off that the game should not have been played.

Earlier in the season, since returning to the Showgrounds, United had big games with current League leaders Linfield postponed due to the unplayable pitch.

The upcoming Toals County Antrim Shield final has been given the Showgrounds as stage for the showdown.

There will need to be a marked improvement if the Shield is to be played in Ballymena.