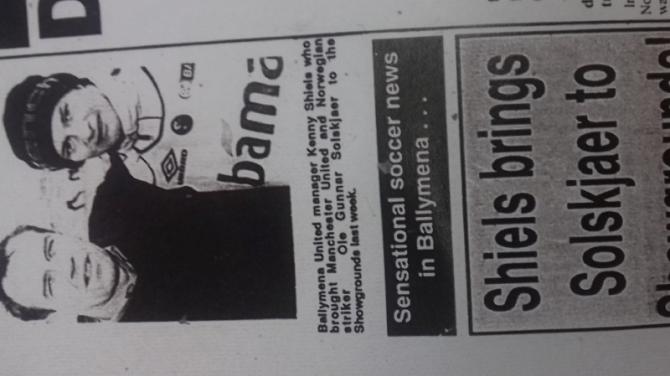 OLE Gunnar Solskjaer, the man who has helped turn the fortunes of Manchester United, had a very brief spell at Ballymena Showgrounds!

For the ace striker was part of the Norway side which came to town to train - prior to playing Northern Ireland the following day in a friendly at Windsor Park, Belfast.

It will be 18 years ago next month since Solskjaer and co. made use of the Showgrounds facilities while part of the Province was lying deep in snow!

It was the then Ballymena United manager Kenny Shiels who brought the Old Trafford star and his Norwegian team mates to the Showgrounds.

Speaking to Guardian Sport this week Shiels, whose last job was boss of League of Ireland side Derry City, recalled the time he set-up the Ballymena date for the Norway international side.

He said the Northern Ireland v Norway clash was in doubt due to snow which had carpeted the Belfast venue.

“The heavy snowfall played havoc with match preparations,” outlined Shiels, who was in charge of looking after the Norwegian side during their stay in the Province.

They said they needed somewhere snow-free to train and Shiels suggested they use the then Ballymena Borough Council owned facilities at the Showgrounds.

Shiels made a couple of phone calls and had no trouble at all setting up the United ground as the Norwegians base for their 90 minutes workout. And use of the venue certainly paid handsome dividends - although NI boss Sammy McIlroy was not too pleased at just how successful it had been!

At Ballymena Showgrounds Manchester United star Solskjaer and co. met a handful of young United fans and posed for photographs and signed autographs..

Ross Wylie and Richard and Stephen Quigley had their photo taken along with the Norwegian and Man U star!

On what was a bitterly cold afternoon, back on Tuesday, February 27, 2001, with some traces of snow on the main pitch, the Norway side was put through its paces by coach Nils Johan Semb.

Afterwards they were coached back to the Hilton Stakis Hotel in Templepatrick. At the time Ballymena Showgrounds was undergoing a £2.5 million facelift.

Boss Shiels said it would have been nice to invite the Norwegians back when the Second Phase, which was to include a new stand at ‘The Clock’ side of the ground, was complete.

“Perhaps they, Solskjaer and all, should be asked to attend the official opening,” quipped Shiels.

Back in January 2001 Shiels was appointed manager of Ballymena United.

He was full of praise for Ballymena Council who bent over backwards to accommodate the Norwegians.

Meanwhile, Solskjaer, who will be 46 next month, is current caretaker manager of Manchester United.

He has guided The Reds to seven wins out of seven since taking over. Before he arrived in England, Solskjær played for Norwegian clubs Clausenengen and Molde.

He joined Manchester United in 1996 for a transfer fee of £1.5 million. Nicknamed "The Baby-faced Assassin", he played 366 times for United, and scored 126 goals during a successful period for the club.

He was regarded as a "super sub" for his trait of coming off the substitute bench to score late goals.

Solskjær's defining moment in football came in injury time of the 1999 UEFA Champions League Final, where he scored the winning last-minute goal against Bayern Munich, completing a remarkable comeback and winning The Treble for United. He returned to his native country in 2011 to manage his former club, Molde, whom he led to their two first ever Tippeligaen titles in his first two seasons with the club. He secured a third title in as many seasons, when his team won the 2013 Norwegian Football Cup Final. In 2014, he served as manager of Cardiff City, during which the club were relegated from the Premier League.

* At the weekend interim boss Solskjaer guided Manchester United to their SEVENTH successive victory - and a record breaking SIXTH in the Premiership! United beat Brighton 2-1.

Next up is an away trip to play Arsenal in the FA Cup on Friday night!