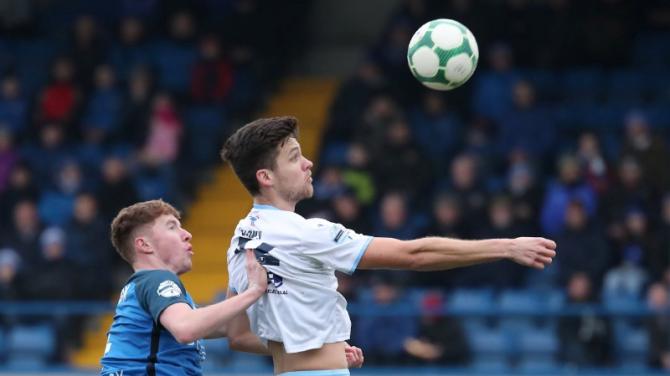 DAVID Jeffrey said Ards will be a tough ask this Saturday at the Showgrounds, writes Shaun O’Neill.

The United manager believes his side will face a difficult clash when the meet in the Premiership (3pm).

Ards are currently at the bottom of the table - with United sitting neatly in second.

But Jeffrey will not be reading too much into League positions.

“I watched Ards on Friday night and I was most impressed with them, they did not deserve to get beaten,” said Jeffrey, referring to their 2-1, late, late defeat by Coleraine in Bangor.

“Ards were excellent and played ever so well and their performance was not indicative of the position they are in the league. They are fighting for their lives and Colin Nixon has them giving absolutely everything.”

The United boss said from a totally neutral point of view he thought Ards were really, really unfortunate not to take something out of the game.

At the weekend Ballymena scored a 2-0 away win over Glenavon at Mourneview Park - their first victory there since 2012.

On target for United were Jude Winchester and Adam Lecky.

Winchester had to retire early in the second half, a virus leaving him running on empty.

Lecky was man of the match against Glenavon.

He scored a goal and set up Winchester with his, held up the ball brilliantly throughout and won every header he challenged for.

Boss Jeffrey was delighted with the win which keep them hot on leaders Linfield’s tail, with just three points separating them.

After the 2-2 draw with Dungannon Swifts the previous week Jeffrey admitted his players saw a different side to him!

But he explained that they worked very hard during the week, going back to basics again, refocusing and reminding the players of how good they are tactically and technically and physically. This encouragement paid handsome dividends with United going to Glenavon on Saturday and getting the win.

Seven Towers United Supporters Club are hoping to take a bus to Londonderry on Saturday, February 9, for the Institute game.