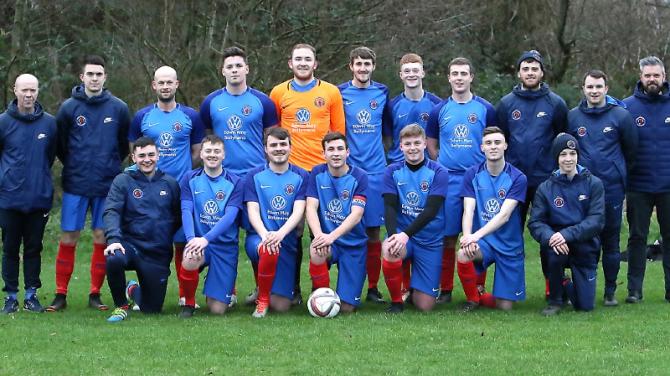 TWO saves in the shootout from Ahoghill Thistle keeper Sean Ward saw him emerge the hero as his side edged past fellow BSML side Abbeyview and into the last 16.

Thistle had the first chance of the game when David Campbell was sent clear but he drilled just wide.

Abbeyview got themselves into the game and got their noses in front on 11 minutes when Glenn Vance broke clear.

His shot was blocked and fell to Ryan Carson to fire home.

There was chances at both ends after this with Colin Moore being denied by Darren Harbison.

At the other end Vance was denied by Ward.

Thistle got level just on the half hour mark when Corey Price slipped in Campbell and he fired into the far corner of the net.

Matthew Boyd then went close to putting Thistle in front but he hit the side netting when well placed and Colin Moore had the ball in the net but was adjudged offside.

The last chance of the half fell to the home side but again Vance was denied by Ward as the half finished level.

Ward made a great save juat after half time when he denied Vance from putting View back in front after the break.

Thistle then started to take control with Boyd denied by Darren Harbison then Campbell was twice denied by the cross bar.

Both sides were then reduced to 10 men after an altercation in midfield.

Gavin Kernohan almost snatched the game for Thistle in the dying minutes but his spectacular volley from 40 yards cannoned back off the crossbar as the game moved into extra time.

Neither side created any clear chances in either period of extra time, bur View were reduced to nine in the dying minutes but held out to take the game into a shootout.

Ward was to be the hero for Thistle in the shootout as he saved both Views opening spot kicks.

This advantage left Ryan Marks to score the winning spot kick and he made no mistake to send Thistle into the last 16.

Saints started the game in devastating form keeping the ball from the first whistle moving Clough from side to side before the decisive move came on 90 seconds.

Brian Paul Donnelly fed the ball into Liam Cassley he showed great strength to hold up the ball before laying off to Alan Telford who fired the ball into the roof of the net to give Saints a great start.

This goal really rocked Clough as Saints went in search of more goals and but for a brilliant Colin McCaughern save Chris Wilkinson would have got a second goal from a free kick.

Cassley then had a half chance to add a second but he misfired when well placed.

Clough started to get into the game after half an hour but failed to trouble Leon Bonnes in the Saints goal as the half finished with Saints holding a 1-0 lead.

The second half saw both sides battle hard for supremacy in the early stages with little in the way of goal mouth action.

As the half wore on Clough tried to pen Saints in but Saints defended brilliantly with Wilkinson and Niall Swann limiting the home side.

With Clough pushing Saints always looked dangerous on the break and should have got a second goal on numerous occasions with Kavan Keenan and Alan Telford on two occasions firing wide when well placed.

Five minutes from the end Clough had the ball in the net when David Gage headed home a Richard Reid cross but the goal was ruled out for offside.

With the game moving into injury time Saints were awarded a spot kick when Ryan Wilkinson was fouled as he was about to shoot.

Telford stepped up and gave Colin McCaughern no chance with the spot kick to give his side the win and keep their unbeaten league run going.

A late goal from Thomas McAuley snatched a point for Southside as they kept up their hopes of a Top Four finish.

Southside went 1-0 up early on when Lee McCallion found the net.

But Michelin levelled when Peter Adams volleyed home from a Gareth Hill header across the box after a terrific Brian Watt cross.

Southside took the lead again when a cross from Ryan Agnew on the left hand side evaded everyone and ended up in the far corner.

It was level before the break though when Adams got his second to make it 2-2 finishing through the legs of Kyle Rowe after being slipped in by Jordan Lemon.

The game flowed from end to end with neither side getting on top before Michelin took the lead.

Brian Watt robbed a Southside defender and drove down the left to cut back for Arron Lemon to tap in with 18 minutes remaining.

Michelin could have added more goals on the break but in the dying seconds they were hit with an equaliser when a long ball forward from Kyle Rowe was cleared to Thomas McAuley and he found the net with a brilliant volley to snatch a point from the game.