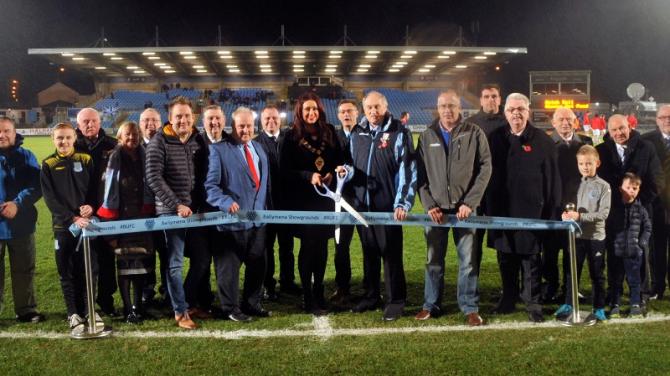 MID and East Antrim Mayor, Councillor Lindsay Millar, has said the extensive refurbishment of the main arena at Ballymena Showgrounds is an excellent example of how Council and local organisations can work in partnership to achieve their vision of creating a better future for all.

The Mayor was speaking to invited guests in the Des Allen Suite at the Showgrounds on Friday night at the official opening of the main pitch.

“As a Council we now believe that the quality of the playing surface is second to none within the Province,” said the Mayor.

“And combined with the newly installed sprinkler system it is our hope that the pitch can be maintained at the high quality level that the club (Balymena United) and Manager (David Jeffrey) desire.”

Cllr. Millar recalled that the development of Ballymena Showgrounds was ratified by Council back in January.

“Council fully recognises the pressing time scales that all partie were put under to deliver the project and I would like to put on record our thanks to Council staff, Consultants and Contractors for all the effort they made in helping to deliver this project within budget and within the time frames,” said the Mayor.

The refurbishment of Ballymena Showgrounds main arena in grass as opposted to 3G, continued the Mayor, has been strategically aligned with the IFA and their desire to bring top class tournaments to the Province.

“As a Council we are working with the IFA to fully atilise what is regarded as the best stadium outside of the National Stadium at Windsor Park,” said Cllr. Millar.

The Mayor thanked Showgrounds main user, Ballymena United, for their commitment and engagement in helping to move the project further.

“Ballymena United agreed to forego playing at home since August and played their first game back at the Showgrounds on October 6,” outlined the Mayor.

Prior to kick-off the Mayor cut a ribbon at pitch side on Friday night, officially opening the main central arena.

And in atrocious conditions, with the rain lashing down, United celebrated the occasion by flooring the League leaders, Glenavon, winning 2-1 with a late, late winner from super sub Johnny McMurray.

The top of the table Premiership clash was televised live on BBC 2!

* United Chairman John Taggart said the pitch is in perfect condition and wished Alex Carmichael and his team every success with its continued maintainance.