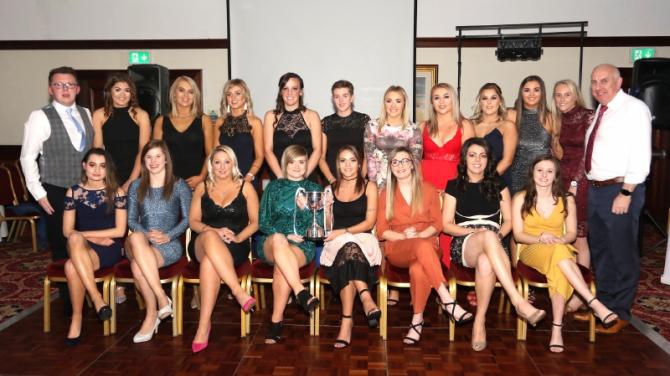 Ballymena United Allstars LFC closed another remarkable season with their end of season celebration on Saturday night in the Adair Arms Hotel.

More than 130 people attended the biggest celebration in the Club’s history – a testament to the continued growth and development of the Club.

Special guests, David Jeffrey, Ballymena United Manager, John Taggart, Ballymena United Chairman and Alan Nixon of the IFA joined players from the Senior and Junior sections of the team, as well as coaches, parents and supporters.

In a transition season for the senior team, guests celebrated the Allstars winning the Championship League Cup thanks to a super strike from Kylie Doherty and a hat-trick from Rebekah Reynolds.

And captain fantastic Reynolds was crowned Championship Player of the Year by the NI Women’s Football Association.

And Assistant Coach Ciaran Duffy said the senior Player of the Year epitomised this.

Danielle Winter was recognised with the award for the strength of character, never say die attitude and sheer determination.

“It has been a great season and to finish it with winning the League Cup Final was just fantastic.

“It was a great day for the Club, the fans, the staff and of course for the players.

“The whole squad are really close and work hard together every week – everything is a massive team effort.

“I am delighted to have won this award and to be celebrating with everyone.”

Megan Henry was named Young Player of the Year in recognition of her consistent performances in her first season as part of the senior squad, having moved up from the junior section.

Rebekah Reynolds took home the award for Top Goalscorer and was named Player’s Player of the Year by her team mates for her consistent and inspirational performances.

The junior section awards recognised the achievements of players across the June 2017 – May 2018 season when the Club had Under 9, Under 11, Under 13 and Under 15 squads.

Freya Bones (Under 9s), Courtney Lindsay (Under 11s), Stephanie Mark (Under 13s) and Natalie Mills (Under 15s) won the Player of the Year awards in each of their respective age groups.

Mollie Currie (Under 9s), Gemma McClelland (Under 11s), Eve Anderson (Under 13s) and Niamh McGaughey (Under 15s) were named Most Improved Player in their squads.

The Under 15s also selected a Player’s Player of the Year, with the honour going to Laura McKillen.

The awards were presented by Ballymena United Manager David Jeffrey who then spoke of his pride in the Allstars.

Jeffrey told the audience how he and Brian McLaughlin feel very passionately about making Ballymena United a community and that the women’s game is not a box ticking exercise for the Club.

He delighted the room by talking about how he has been blessed with a lot of success in his life but one of his most priviledged moments, one of the best nights ever was being in the stands at Seaview in September, watching the Allstars “do the business” and win the League Cup.

Trevor Boyce concluded the evening by speaking of the importance of the junior section to the Club, how it is the lifeblood of women’s football in the town and surrounding area, and how at Ballymena United, ‘we are making superstars’.

Player of the year - Freya Bones

Player of the year – Courtney Lindsay

Player of the year – Stephanie Mark

Player of the year – Natalie Mills

Player of the year – Danielle Winter