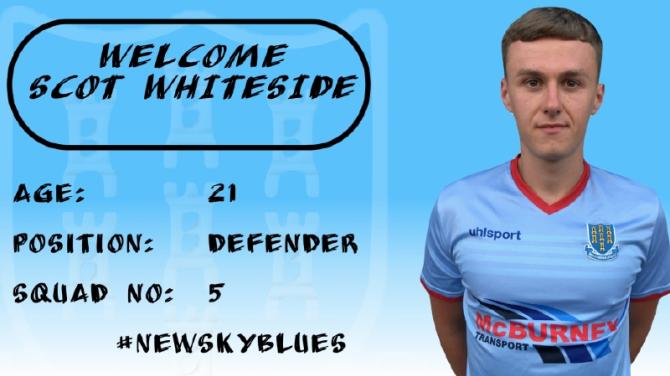 The 21-year-old centre-half joins United from Derry City on a two year deal.

Whiteside progressed through the youth ranks at Glasgow Rangers and has played for Northern Ireland Under-19s.

Ballymena manager David Jeffrey has said when recruiting he likes young players with a point to prove who are keen to come to United.

In Whiteside Jeffrey says he has ticked all three boxes.

The defender says playing under Jeffrey and his management team was a big appeal - and highlighted that playing for a place in Europe is very much part of his plans.

On top of this Jeffrey has extended the contracts of defenders Conor Quigley., Thomas McDermott and experienced midfielder Stephen McAlorum.

Quigley and McDermott have each agreed a two year deal while 31-year-old McAlorum has been given a structured one year contract.

It will be very much a new-look United who kick off the new Premiership season away to Dungannon Swifts on Saturday, August 4.

Ballymena United extend sympathy to President and main sponsor Norman McBurney, and his family circle, following the death of his brother, Desmond.

United will know on Wednesday morning their opponents in the first round of the BetMcLean League Cup.

The draw takes place in the Mervyn Brown Suite at the NI Football League offices at the National Stadium at 11am.

United Under-19s have a side in this year’s Foyle Cup.